For simplicity let us assume our stego-image is greyscale (one colour channel) rather than RGB (three colour channels). Each pixel is a single byte with a value ranging from 0 (black) to 255 (white). The image is 3 x 3 pixels and can be visualised as follows:

P is the set of all horizontal pairs:

We create the sets X and Y using the following rules:

Using these rules we calculate X and Y as follows:

The sizes of X and Y will be roughly the same for all natural images. However when a message is added to a natural image using LSBR, this balance changes and results in the creation of a new set, Z. This is because randomly changing bytes’ LSBs in the image does not affect X and Y in the same way.

This movement between sets based on which LSBs are changed can be measured and is how SPA calculates the length of the hidden message.

The diagram below shows how LSB changes move pairs between sets. X is the set defined above, W is the set of pairs in Y which differ on the LSB only such as (4,5), V is the rest of Y such that V ∪ W = Y, and Z is the set of equal pairs. 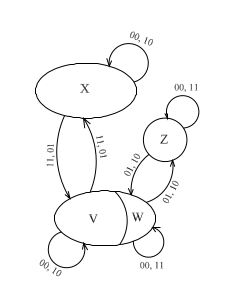 We can derive an expression for the sizes of these sets and the percentage length of the message, p. If the percentage length is p, then the probability that any one byte is changed is p/2. For example, if the cover image has 100 bytes and the message is 25 bits, we will need to change roughly 12 LSBs as around half of the LSBs will already be set to the correct value. This means the probability of changing one byte is 12.5%, and the probability a byte will not be changed is 1 − p/2 or 87.5%. Expanding on this gives us the following probabilities:

We can define four more sets, X′, Y′, W′, and Z′. These sets are defined in the same way as their corresponding sets (X, Y, W, and Z, respectively), however they represent the pixel values after LSB Replacement. We can calculate the sizes of X′ and Y′ (V′ ∪ W′) as follows:

Similar logic can be used to calculate the size of Z′.

Finally, we can solve the following quadratic equation to determine the length of the hidden message, p:

To calculate p for an RGB image, the stego-image is preprocessed so the bytes in each row of pixels are sorted by colour channel. For example, a 3 x 3 RGB image can be visualised as follows:

After sorting, the image changes as follows:

The pairs would be as follows: