Regular and Singular Groups (RS) attempts to calculate the lengths of secret messages hidden in natural images by measuring the noise added by LSB Replacement (LSBR). RS is based on the fact that the LSB values in natural images are not random. The pixels in natural images tend to blend into each other, similar to a gradient. Steganography using LSBR adds noise (artificial randomness) to the image. This noise can be measured. RS is a type of statistical analysis steganalysis.

There are two additional functions which can be applied to each group. Both of these functions simulate hiding messages of varying lengths in the LSBs. The function F1 replaces LSBs using LSBR, whereas the function F−1 replaces LSBs similar to LSB Matching (LSBM), but does not prevent 0 becoming −1, and 255 becoming 0.

(As an aside, a cover image will typically return more R groups, as both F1 and F−1 are introducing noise. Additionally, the number of R and S groups will be consistent such that RF1 = RF−1 and SF1 = SF−1).

We can plot R and S on a graph using three predefined message lengths: 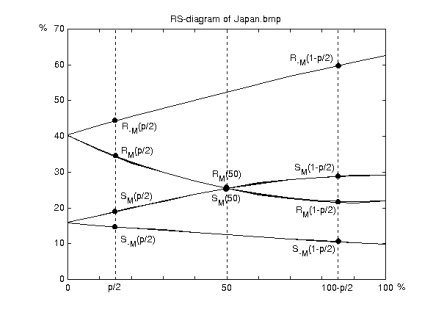 As can be seen in the above image (a diagram showing how the length of the message p embedded in a test image called Japan.bmp affects the number of R and S groups; note the subscripts M and −M can be considered equivalent to F1 and F−1, respectively), plotting the points for the three predefined message lengths for both F1 and F−1 gives us five pairs of R and S groups spread over nine points. These points connect to create four intersecting curves, typically two straight lines and two polynomials. What is important to note here is the above image could be any natural image - there will always be four curves and nine predictable points. For example, if the image contains a hidden message of any length, F−1 will always produce a higher number of R groups compared to F1.

The four curves allow us to find the length of the hidden message p. Using the above image as an example, if we change the x−axis so p/2 becomes 0, and 100 − p/2 becomes 1, the x-coordinate of the intersection point RM(50), SM(50) is a root of the following quadratic equation: